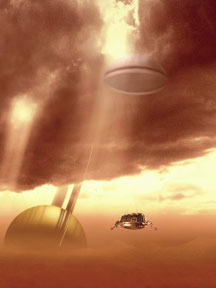 An artist's rendition of Huygens' parachute descent through the cloud layers of Titan's atmosphere, with Saturn visible on the horizon.
Click on image for full size
Image courtesy ESA.

The Huygens space probe, built by the European Space Agency, landed on Saturn's giant moon Titan in January 2005. Huygens transmitted measurements of Titan's thick atmosphere, and images of the mysterious moon's surface, back to scientists on Earth.

The probe had ridden "piggyback" on NASA's Cassini spacecraft during the seven-year journey from Earth. Cassini released Huygens on December 24, 2004, three weeks before the probe's plunge into Titan's atmosphere on January 14, 2005. Huygens was hurtling at a speed of six km/s (13,400 mph) when it entered Titan's upper atmosphere, protected by a heat shield that could withstand the 1,700° C (3,000° F) temperatures of atmospheric heating. A series of parachutes further slowed the spacecraft and gently lowered it during its two-hour descent through Titan's dense atmosphere. Instruments on the probe measured many properties of the atmosphere during descent. Upon landing, Huygens measured properties of the moon's frigid (-178º C, -288º F) surface, transmitting data to Cassini (which relayed it to Earth) for a couple of hours after landing until Cassini disappeared over Titan's horizon.

Huygens carried a suite of instrument packages for studying Titan's atmosphere, including the Aerosol Collector and Pyrolyser (ACP), Doppler Wind Experiment (DWE), Gas Chromatograph and Mass Spectrometer (GCMS), and Huygens Atmosphere Structure Instrument (HASI). A camera on the Descent Imager/Spectral Radiometer (DISR), which also measured atmospheric properties and the spectra of the surface, captured several hundred images. Once on the ground, the probe's Surface Science Package (SSP) measured properties of the surface materials, such as their temperature and heat conductivity, electrical resistance, index of refraction, and speed of sound.

The probe was named in honor of the 17th century Dutch astronomer Christiaan Huygens. Huygens discovered Titan in 1655.