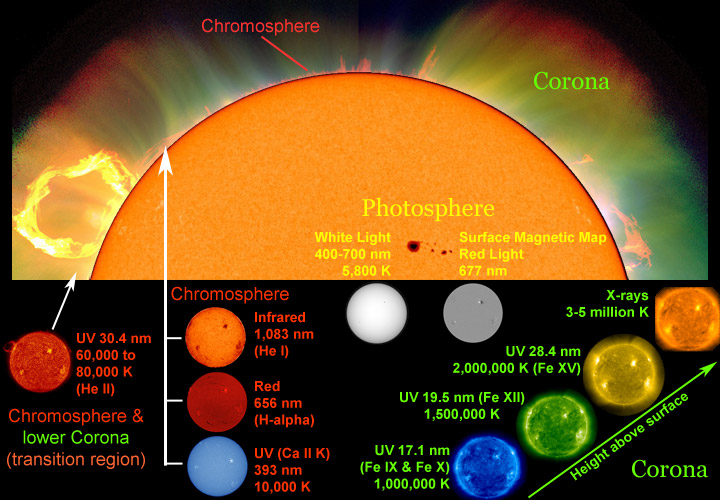 Astronomers use certain wavelengths of light and other electromagnetic emissions as "windows" into different regions of the Sun. White light with a wavelength between 400 and 700 nanometers (nm) shows the photosphere, the visible "surface" of the Sun. Red light "magnetic maps" reveal the magnetic field at the photosphere. Infrared "light" from helium, red light from hydrogen, and ultraviolet (UV) "light" from calcium all show features in the chromosphere. The chromosphere is the Sun's lower atmosphere, where temperatures rise to tens of thousands of kelvins. Extreme ultraviolet (EUV) radiation from helium at 30.4 nm wavelength show us the transition region between the lower atmosphere and the much hotter corona (upper atmosphere). High energy EUV and X-ray emissions come from the corona, where temperatures rise above a million kelvins. Ultraviolet energy at wavelengths of 17.1, 19.5, and 28.4 nm from iron ions (Fe IX, Fe XII, etc.) show us hotter areas as our view moves higher and higher above the photosphere. X-rays provide us with a picture of the upper parts of the corona at temperatures of several million kelvins.
Original artwork by Windows to the Universe staff (Randy Russell) using images courtesy of SOHO (NASA and ESA), NCAR/HAO/MLSO, Big Bear Solar Observatory, and SDO/AIA.