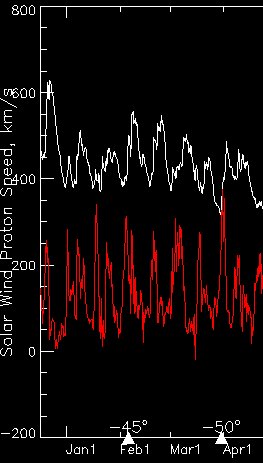 The solar wind is approximately 95% protons or H+ ions (a Hydrogen atom which has lost one electron), 4% alpha particles or He+2 ions (a Helium atom which has lost two electrons) and 1% minor ions (Carbon, Nitrogen, Oxygen, Neon, Magnesium, Silicon and Iron are the most abundant). You can see that solar wind makeup basically mirrors the Sun's makeup which is mostly Hydrogen, then Helium, then Carbon, then Nitrogen, then Oxygen, then Neon, and so on...Scientists assume that on the broad scale, there are no neutral particles or negative ions in the solar wind. The plasma that makes up the solar wind is either a positive ion or a free electron. Also, the solar wind is electrically neutral - it contains an equal numbers of positive and negative charges.

At the orbit of the Earth, the solar wind has an average density of about 6 ions/cm3, compared to 2.5 10^19 molecules/cm3 in the Earth's sea-level atmosphere. That means that solar wind plasma is more rarefied than the best laboratory vacuum on Earth! The density of the solar wind decreases farther out from the Sun, because the particles are spreading out into space. Density is in fact inversely proportional to the square of the distance from the Sun.

Solar wind velocity is normally in the range from 300 to 600 km/s, but some impulsive events like solar flares or CME's can produce speeds over 1000 km/s! Past the Earth's orbit, the solar wind continues with undiminished speed well past the orbit of Pluto. The particles do not slow down until they reach the termination shock within the heliosphere, where the solar wind slows from supersonic to subsonic speeds. Scientists are hoping that the Voyager spacecraft will give more insight into the solar wind's realm of influence as Voyager I & II near the termination shock and the heliopause.

"Helios" is the ancient Greek word for the "sun". The Heliosphere is the entire region of space influenced by the sun. That would include the regions of space which contain the IMF. The magnetic field...more

The SWICS (Solar Wind Ion Composition Spectrometer) instrument on Ulysses is to measure the frequency of occurence, temperature and mean speed of all the major solar wind ions, from Hydrogen through Iron....more

SWOOPS stands for "Solar Wind Observations Over the Poles of the Sun". This Solar Wind Plasma Experiment onboard Ulysses is basically making a map of the interplanetary plasma within the heliosphere (i.e.,...more