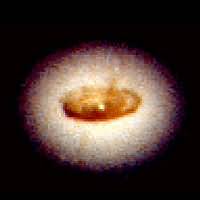 No one is sure that Black Holes really exist, but most scientists think they do. They are very hard to see, because they are black and so is space. They are black because their gravity is so strong that not even light can escape them.

Black Holes can form from a supernova explosion. The collapse of a star's surface inward causes the explosion. And it also makes a black hole. But only if the star was big enough. It takes a pretty big star to make a Black Hole.

What would it be like to enter a black hole? Not fun. First, as you approach the black hole the difference in gravity's pull on your head compared to your feet would rip you apart. But suppose you survived that. Once you entered the Black Hole you cannot return, remember not even light gets away from a Black Hole. In the end the Black Hole would crush you out of existence. So I wouldn't try it if I were you.

Scientists think they may have found a way to escape from a black hole! There are some really strong winds in the middle of a black hole. These winds make a shield from the black hole's gravity. Matter...more

Scientists found a really old galaxy! It is one of the first galaxies ever! The galaxy is inside a huge black hole. They used radio signals to find it. Black holes give out energy when the suck in an...more

Everyone likes hearing about black holes. They are so mysterious! Scientists using the Chandra X-ray Observatory and the Hubble Space Telescope have found material spiraling into black holes! Both teams...more