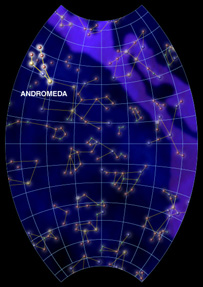 The myth of Andromeda is easily found in Greek mythology. Andromeda's mother, Queen Cassiopeia, bragged that she was prettier than the sea nymphs. The nymphs complained to Poseidon, who in turn sent a monster to destroy her land. The queen and her husband, King Cepheus, were told to sacrifice their daughter to save the country.

Andromeda was chained to a cliff for the monster, called Cetus. Just as the monster was ready to bite down on the maiden, Perseus rescued her. He used Medusa's head to turn Cetus into stone. Perseus and Andromeda were put in the sky along with Cepheus, Cassiopeia and Cetus.

Andromeda is right next to Pegasus, which leads some to believe that at one time, some of these stars used to be part of the winged horse. The Princess' head is the star Alpheratz, which is also the last star in Pegasus. The image shows Andromeda upside-down, which is often her position in the sky.

There is plenty to see in this fall constellation. With the help of a telescope, you can find two faint open clusters. NGC 752 is located to the left of Andromeda, while NGC7686 is in the upper right corner, above Pegasus. The Great Andromeda Galaxy is the most distant object visible to the naked eye. You can find this famous galaxy on the right side of Andromeda, about half-way up the constellation. There are several other galaxies located around the Princess, but most are too faint to see, even with a telescope.