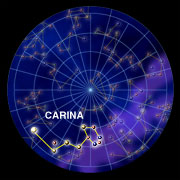 The brightest star in Carina is called Canopus. It is actually the second brightest star in the sky behind Sirius. Canopus was the name of the pilot of Menelaus' fleet. It lies at the very end of the constellation.

The famous Keyhole Nebula is located just below the circle in the constellation. It is one of the most watched nebulae in the sky, and scientists say it contains the most visible star that will become a supernova.