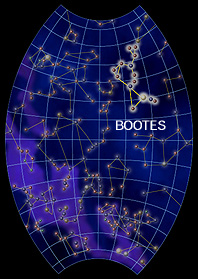 Bootes, the herdsman, rides through the sky during the late Spring and early Summer. Bootes is fun to look at because it has the shape of a kite, with the bright star Arcturus at the point of the kite where the tail is attached.

Bootes was identified with a farmer who plows the land during spring. The Romans believed that Bootes was the herdsman of the seven oxen represented by the seven stars of the Big Dipper.

Ursa Major is a very famous constellation. It is also called the Great Bear. Ursa Minor is the Little Bear. The body and tail of the Big Bear make up the Big Dipper. There are a lot of myths about this...more

Callisto was a river goddess. Callisto was the favorite companion of the moon goddess Diana. She used to accompany Diana on the hunt. One day the god Jupiter saw the beautiful Callisto and fell in love...more

Hydra, the sea serpent, may be the longest and largest of all constellations, but its stars are very faint. It is so long that four constellations run along its northern side. These are Cancer, Leo, Virgo...more