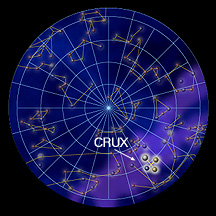 In the foot of the cross you will find Acrux, the brightest star of this constellation. Acrux is really a double-star system. Despite its small area, Crux contains at least ten open clusters visible with small telescopes.