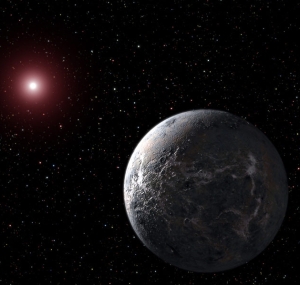 Did you know that about 200 planets have been discovered in orbit around distant stars? The first planet found to be orbiting a star like our Sun was announced in 1995. Since then astronomers have continued to find new planets outside of our solar system, at a rate of more than one new planet every month!

The star and its planet orbit a common center of gravity. The planet moves in a wide orbit, while the star just appears to wobble slightly. By measuring the Doppler shift from the spectrum of the star, scientists can detect the tiny motion caused by the planet. Most of the distant planets were discovered using this technique.

If we are lucky enough to be lined up properly with the planet's orbit, it can occasionally pass in front of the star, blocking out some of the light that we usually see from the star and briefly making it appear dimmer. It's like a solar eclipse, but the planet only covers a small fraction of the star. Only a few of the planets outside of our solar system pass in front of their stars.

All of the distant planets are much too far away to resolve directly. We can only see their effect on the star that they orbit.

A team of international astronomers reports in the Feb. 15 issue of Science the discovery of a solar system nearly 5,000 light years away containing scaled-down versions of Jupiter and Saturn. Their findings...more

Astronomers have discovered an extrasolar planet only three times more massive than our own, the smallest yet observed orbiting a normal star. The star itself is not large, perhaps as little as one twentieth...more