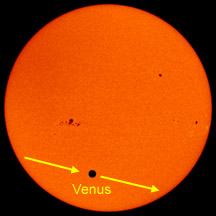 This picture shows what a transit of Venus might look like. The big black dot near the bottom is Venus. The yellow arrows show how Venus will move during the transit in 2004.
Click on image for full size
This illustration is original Windows to the Universe artwork created by Randy Russell. The image of the Sun is courtesy SOHO (ESA & NASA); information on the apparent size and path of Venus courtesy Fred Espenak, NASA's GSFC.

Sometimes the planet Venus gets between Earth and the Sun. When it does, we see a black dot move across the Sun. The black dot is Venus. Astronomers have a name for this. They call it a "transit" of Venus. A transit is like an eclipse of the Sun.

Transits of Venus don't happen very often. The last one was way back in 1882!

NASA has a web site with lots of news about the transit in 2004.