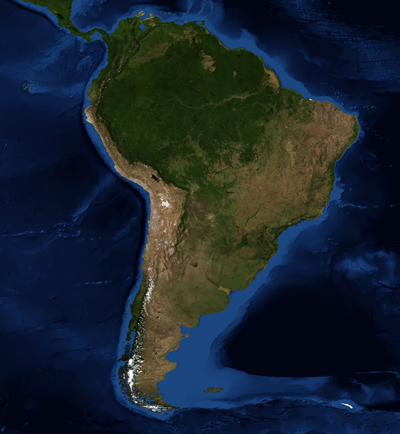 The Southeast Pacific region is a very diverse part of South America. It includes coasts along the ocean and the Andes mountains in Chile and Peru.

The climate of the Southeast Pacific is influenced by the Andes, ocean currents, and winds. These things cause upwelling in the ocean and help keep the ocean and air temperatures cool.

The coast of Peru and northern Chile has a subtropical desert climate. Fog is common on the coast, and the only precipitation is an occasional light drizzle. This area also contains the Atacama Desert, which is one of the driest places on the Earth. The Atacama Desert contains many minerals, including copper. Central Chile has a mild climate and receives more rain than the northern areas.

Chile has some island territories located in the Pacific Ocean, including Easter Island. Easter Island is 3,600 km (2,237 miles) off the coast of Chile and has a humid, subtropical climate.

There are a lot of clouds over the Southeast Pacific Ocean off the coasts of Peru and Chile in South America. In fact, this area has the largest amount of stratus and stratocumulus clouds in the world!...more

Drizzle is very light rain; the water drops that make up drizzle are smaller than rain drops. Drizzle can be so light that only a millimeter of water falls to the Earth's surface in one day. It is produced...more