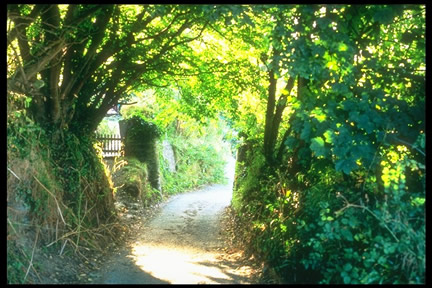 A species of moth in England called the peppered moth is found in two varieties: light gray and dark gray. The light gray version used to be far more common, but researchers observed that between 1848 and 1898 the dark colored ones were becoming more common. In fact, only 2% of the moths near one industrial city were light gray.

This change in moth coloration occurred at the same time that coal was becoming a major source of power in England. Coal is not a very clean energy source and burning vast quantities of it put large amounts of soot into the air in and near London and other industrial cities. The soot would settle over the land, buildings and even the trunks of trees. Tree trunks turned from light gray to black. Peppered moths are active at night but rely on places where they can blend in, avoiding predators, during the day. Light-colored peppered moths were no longer well camouflaged on the darkened tree trunks. The dark colored moths, however, were well camouflaged. Because predators were able to spot the light moths more easily, the dark moths were more likely to survive and reproduce. Eventually, moths in industrialized areas of England were predominantly the dark variety and moths in the non-industrialized regions (where tree trunks were still light in color) remained predominantly light gray in color.

Several scientific studies have tested the hypothesis that peppered moth coloration was due to natural selection. For example, a scientist named Kettlewell bred both varieties of moths and marked them so that he would know when he found them again. Then, he released some of each variety into a region where pollution was high, and some of each variety into a region where pollution was low. Kettlewell later went out to recapture as many of the moths as he could from both areas. He found more dark moths in the polluted area and more light gray moths in the low pollution area, suggesting that more of the dark ones survived in the soot covered industrial setting and more of the light colored ones survived where the tree trunks remained light in color. This supports the hypothesis that the change in moth color was caused by natural selection.

The peppered moth case is an example of natural selection. In this case, changes in the environment caused changes in the characteristics that were most beneficial for survival. The individuals that were well adapted to the new conditions survived and were more likely to reproduce. This particular type of natural selection, when amounts of genes varieties shift in a particular direction in response to a new factor in the environment, is called directional selection.

The awesome power of a giant black hole was revealed by looking at this galaxy in three different types of light. The picture that you see is of Centaurus A, a very peculiar galaxy. A galaxy is just a...more