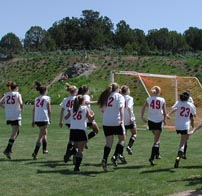 People have no choice but to breathe the air around them regardless of its quality. When they breathe ground-level ozone or air laden with particulates, they do so at risk to their health. Symptoms of air pollution exposure include irritation to ones eyes, throat, and lungs. Wheezing, coughing, burning eyes, chest tightness, headaches, and difficulty breathing are all commonly reported when air quality is poor. Increased doctor visits, hospitalization, and school absences also frequently occur at such times. Peoples symptoms often disappear once air quality improves, but air pollution exposure can also result in tragedy.

The first major air pollution event to be studied occurred in 1930 in the Meuse Valley of Belgium. A dense blanket of smog hung over the valley for five days, which killed 63 people and caused 6000 others to become ill. A similar event occurred in Donora, Pennsylvania in 1948. Almost 6,000 of the 14,000 people in the town became ill, and 20 died. The most notorious of these tragedies occurred in London in 1952 as a result of dense smog caused by the burning of coal fires. More than 4000 people died over a five-day period. But tragic consequences are not always immediate. Slow and subtle health effects from long-term air pollution exposure are also of great concern and may culminate in life-threatening illnesses such as cancer.

Certain people appear to be more vulnerable to air pollution, namely the elderly, the young, and those with cardiopulmonary disease such as asthma or severe bronchitis. Ozone and air particles appear to be especially harmful to childrens health. This is because their lungs are still growing, they are often outside for long periods, and they are usually quite active. As a result, pound for pound they inhale more polluted outdoor air than adults typically do.

Although people have no choice but to breath the air around them, they do have choices that can help them stay healthy. Paying attention to air quality forecasts, avoiding outside exercise or spending more time inside when ozone levels are high, and supporting measures to improve air quality and reduce sources of pollution are all commendable and health-saving measures. Such actions are a positive response to a problem that can literally steal ones breath away.

Aerosols in the Atmosphere: From Mexico to Japan, Finland to Switzerland, the Same Everywhere

It's no secret that the emissions leaving a car tailpipe or factory smokestack affect climate and air quality. Until now, scientists have struggled to know where the organic molecules from these emissions...more