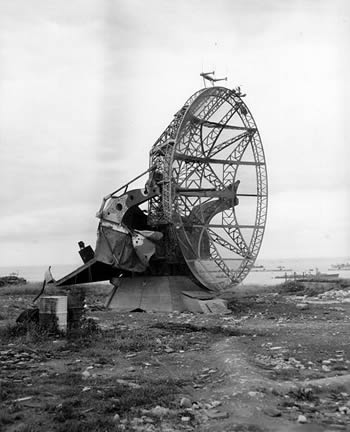 This early radar device was used during World War II on the beach in Normandy. Photograph taken on June 22, 1944.
Click on image for full size
Image courtesy of the public domain

People understood the concept of radar long before scientists first built a radar system. In the late 1930's all of the countries involved in World War II rushed to create better radar systems to use in the war.

Great Britain was one of the leading developers of radar in the years leading up to World War II. The research they conducted led to an early warning radar system called "Chain Home". They built radar stations around the British Isles to provide warning of an aerial invasion. This was one of the advantages which helped the outnumbered Royal Air Force defeat the German Luftwaffe during the Battle of Britain.

While radar development was encouraged by wartime efforts, people were also interested in using radar as an anti-collision system. After the Titanic ran into an iceberg and sank during bad weather in 1912, people were interested in ways to avoid this happening again.

Out of these all of these efforts, weather radar was developed.

Tornadoes are very dangerous so it's important to know when they may form so you can take shelter. Forecastors at the National Weather Service are always looking for possible storms. Even though nobody...more