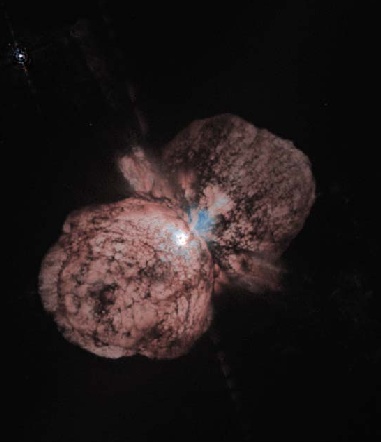 There is some pretty strange stuff in space. Things that not even the strangest science fiction stories have dreamed. Some things are just so weird that even astrophysicists don't know what they are.

When stars die they go out in many different ways. When normal stars, like our sun, die they go by throwing off their outer layers and leaving behind a White Dwarf. When really massive stars die they often blow up in a huge explosion called a Supernova. Depending on how massive a star was that went supernova, a Neutron Star or a Black Hole may be left behind as a monument to the star's life.

But there are still stranger things in space. Not very long ago astronomers were baffled by the mystery of Quasars. These objects look like stars but are much farther away than stars in our galaxy and they are much brighter.

There is also a phenomenon that has caused much excitement and wonder among astronomers called Gravitational Lensing. This is where really massive things, like galaxies and galaxy clusters, actually bend light like a lens using gravity!

But one of the strangest things in space is the mystery of Gamma Ray Bursts. These are what seem to be random bursts of gamma rays, you know the radiation that made the Incredible Hulk. They come from every direction in the sky, they never repeat, and they are very energetic.