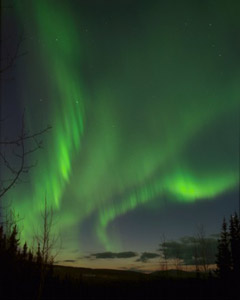 This photo shows green "curtains" of the aurora borealis (Northern Lights). The picture was taken in Alaska in April 2001.
Click on image for full size
Image courtesy of Jan Curtis.

Pictures of the Aurora

The aurora is formed when protons and electrons from the Sun travel along the Earth's magnetic field lines. These particles from the Sun are very energetic. We are talking major-league energy, much more than the power of lightning: 20 million amps at 50,000 volts is channeled into the auroral oval. It's no wonder that the gases of the atmosphere light up like the gases of a streetlamp!

The lights of the aurora come in different colors. Oxygen atoms give off green light and sometimes red. Nitrogen molecules glow red, blue, and purple.