Motions within Earth's metallic core generate the planet's global magnetic field. This magnetic field extends beyond Earth's surface and atmosphere into the space surrounding our home planet. The interaction between Earth's magnetic field, the vast magnetic field of the Sun, and the solar wind (the stream of electrically charged particles flowing outward from the Sun) creates a complex "magnetic bubble" in the space around Earth. This region is called the magnetosphere.

The magnetic field within the magnetosphere is produced by the combination of Earth's field with the constantly varying field of the Sun, and is thus a complex and dynamic structure. The magnetosphere contains ionized plasmas from two sources: solar wind particles (mostly protons and electrons) flowing outward from the Sun, and ionized atoms (mostly oxygen and nitrogen) knocked loose from Earth's tenuous upper atmosphere. These plasmas swirl in complex patterns throughout the various regions of the magnetosphere. Radiation belts accumulate swarms of energetic particles, charged particles gain energy as they spiral along magnetic field lines, and the collisions of particles with Earth's upper atmosphere near the poles produces the light shows known as the auroras.

This tour investigates the physics of charged particle motions in Earth's magnetosphere.

At very high altitudes, the atmosphere becomes very thin. The region where atoms and molecules escape into space is referred to as the exosphere. This is the true upper limit of the Earth's atmosphere....more 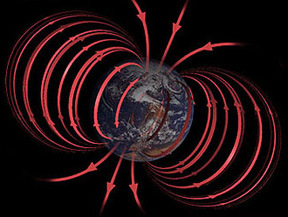