An extreme low tide in winter. Image taken of the Maryland coastline on January 1, 1998. In this image, you can see small pools of water left when the tide went out and footprints of someone who walked in the sand during low tide. Both of these features will be covered up when the tide begins to increase again and the water level rises.
Click on image for full size
Courtesy of NOAA

Tidewater Map of the lower Chesapeake Area Where the HIGH TIDE project is making measurements of the water in the area...

Have you ever walked along a beach at low tide? Maybe you've had the opportunity to explore the world the sea water revealed when the water receded? Everyone likes to look for uncovered sea shells or the small creatures in leftover puddles of water during low tide. One thing is for certain, low tide can look drastically different than high tide!

Gravitational forces of the Moon and Sun on the Earth cause tides. As the tide flows in, water level rises and rises. When the water reaches its highest level, it is considered high tide. After the point of high tide, the waters ebb away. When the water reaches its lowest point, it is considered low tide. The high tide-low tide cycle can occur once a day in some places, twice a day in others. The water level difference between high and low tide varies from a few centimeters to 13 meters depending on the location. Tide gauges placed in coastal areas are used to measure the height of the tide at a given time. There are actually many complexities when it comes to calculating when high and low tide will occur for a given area. Tide tables are put together for coastal areas around the world that are based on past tide measurements like those taken with tide gauges (instead of simply using theoretical predictions). These tide tables tell us when high and low tide will occur for a given place on a given day.

The ebb and flow of tides has a large effect on life in a tidewater region. People need to know how far out to moor their boat so that the boat doesn't get stuck (and possibly damaged!) in the bottom of the empty sea during low tide. It also affects the time when you may want to go to the beach, where and when you (or a company) would catch the most fish, and even when the military would want to launch an amphibious operation! The ebb and flow of the tides also affects the nutrient availability, salinity, temperature, and oxygen content of the water (or lack of water) which greatly affects ocean creatures that live in coastal waters, estuaries, rivers near the sea, salty marshes or coastal lagoons. Tides are so important that some creatures base their feeding or reproductive schedules mainly on the tidal cycle. 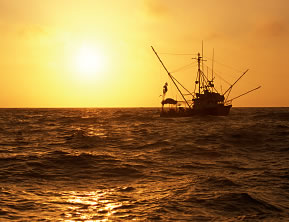