Since it seem unlikely that our society will stop using fossil fuels in the next hundred years, the possibility of capturing CO2 created in power plants and other industrial processes has become very attractive in recent years. This approach, known as carbon capture and storage (CCS), could mitigate global warming by capturing CO2 from fixed sources such as fossil fuel power plants and storing it instead of releasing it into the atmosphere. The captured CO2 would then be transported for storage or used in industrial processes. In a 2005 report, the IPCC estimated that CCS applied to a modern conventional power plant could reduce CO2 emissions to the atmosphere by approximately 80-90% compared to a plant without CCS.

In addition to power plants, there are many other potential applications for CCS. Natural gas production generates capturable amounts of CO2 as it is stripped from the natural gas before being shipped by pipeline or tanker. Oil refineries that make hydrogen (used to remove sulfur from heavier crude oils) also generate capturable amounts of CO2. Another CO2-releasing technology that is almost certain to increase in use is the conversion of coal and natural gas into liquid fuels. 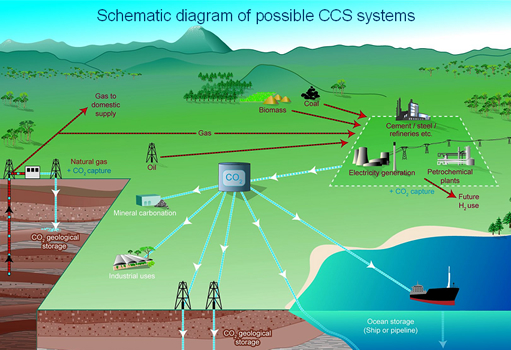 The first step in CCS is, of course, capture. There are currently three main approaches to capturing CO2: post-combustion, pre-combustion, and oxy-fuel combustion.

In post-combustion, the CO2 is removed after combustion of the fossil fuel - this is the scheme that would be applied to conventional power plants. Here, carbon dioxide is captured from exhaust gases at power stations. The exhaust (or flue) gases are mostly nitrogen and water vapor, with only about 15% being CO2. To adapt current power plants to this technology, smokestacks would be replaced by an absorption tower, in which the CO2 is absorbed by chemicals known as amines. A second tower, known as a stripping tower, would be used to heat the CO2-laden amine liquid, releasing the concentrated CO2 and regenerating the amine.

Pre-combustion carbon removal is widely applied in fertilizer, chemical, and gaseous fuel (H2, CH4) production. Some proposed new coal power plants plan to use Integrated Gasification Combined Cycle (IGCC) technology, a version of pre-combustion carbon capture. The idea of a IGCC plant involves oxidizing the fuel in a gasifier before combustion. This process produces syngas which is made of carbon oxides and hydrogen. The resulting carbon emissions can be pulled off in a relatively pure stream while the hydrogen is burned as fuel.

In Oxy-fuel combustion, the fuel is burned in pure oxygen instead of air. The flue gas (exhaust) is mostly CO2 and water vapor, the latter of which is condensed through cooling. The result is an almost pure stream of CO2 that can be transported to the sequestration site and stored. Power plant processes based on oxy-fuel combustion are sometimes referred to as "zero emission" cycles, because the CO2 stored is not a fraction removed from the flue gas stream (as in the cases of pre- and post-combustion capture) but the flue gas stream itself.

Once the carbon has been captured it must be stored. A typical 1,000-megawatt coal-fired power plant will generate approximately six million tons of CO2 each year of operation. Various methods have been conceived for permanent storage of CO2. These forms include gaseous storage in various deep geological formations, liquid storage in the ocean, and solid storage by reaction of CO2 with metal oxides to produce stable carbonates.

Storage of CO2 in deep geological formations uses many of the same technologies that have been developed by the oil and gas industry and has been proven to be economically feasible under specific conditions for oil and gas fields and saline formations. This method involves injecting CO2 directly into underground geological formations, such as oil and gas fields, saline formations, and saline-filled basalt formations. Various physical (e.g., highly impermeable caprock) and geochemical trapping mechanisms would prevent the CO2 from escaping to the surface.

Today, CO2 is often injected into oil fields to increase oil recovery (a process known as enhanced oil recovery). This option is attractive because the storage costs may be partly offset by the sale of additional oil that is recovered. Disadvantages of old oil fields are their geographic distribution and their limited capacity, as well as that the subsequent burning of the recovered oil would emit CO2.

Saline formations contain highly mineralized brines, and have so far been considered of no benefit to humans. The main advantage of saline aquifers is their large potential storage volume and their common occurrence. The major disadvantage of saline aquifers is that relatively little is known about them compared to oil fields. Unlike storage in oil fields or coal beds no side product will offset the storage cost. Leakage of CO2 back into the atmosphere may also be a problem in saline aquifer storage.

Another proposed form of carbon storage is in the oceans. Two main concepts exist. One concept, dissolution would inject CO2 by ship or pipeline into the water column at depths of 1000 m or more, where the CO2 would then dissolve. Another concept, lake-type, deposits CO2 directly onto the sea floor at depths greater than 3000 m, where CO2 is denser than water and is expected to form a lake that would delay dissolution of CO2 into the environment. A third concept is to convert the CO2 to bicarbonates (using limestone) or hydrates.

The environmental effects of oceanic storage are poorly understood. Large concentrations of CO2 kills ocean organisms, but another problem is that dissolved CO2 could eventually equilibrate with the atmosphere, so the storage would not be permanent. Also, as CO2 disolved in water forms carbonic acid, H2CO3, the acidity of the ocean water would increase. The resulting environmental effects on benthic life forms are also poorly understood. Even though life appears to be rather sparse in the deep ocean basins, energy and chemical effects in these deep basins could have far-reaching implications. Much more work is needed here to define the extent of the potential problems.

In this process, CO2 reacts with metal oxides to produce stable carbonates. This process occurs in nature over many years and is responsible for much of the surface limestone. The reaction rate could be made faster by reacting at higher temperatures and/or pressures or by pre-treatment of the minerals, although this would require additional energy. The IPCC estimates that a power plant equipped with CCS using mineral storage would need 60-180% more energy than a power plant without CCS. The significant challenge posed by this storage method will be to identify a feasible carbonation process that will allow mineral storage at an acceptable cost.