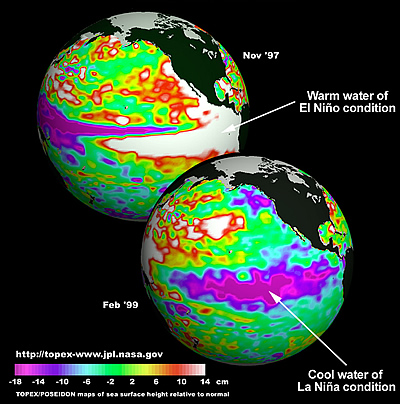 Floods and mudslides in Ecuador, droughts and wildfires in Australia, and California rainstorms  could all these events be related? Yes, they can. They are all affected by changes in the ocean and atmosphere every few years during El Niño and La Niña events. These are parts of the El Niño-Southern Oscillation (ENSO).

During El Niño events, winds that usually blow west across the tropical Pacific Ocean get weaker. Without the wind, seawater at the ocean surface isnt pushed west towards Australia. This causes the warm water of the western Pacific to spread east towards South America. Less fish can live in the warm water because it doesnt have many nutrients in it.

During La Niña events, the winds grow stronger across the Pacific. This causes the surface ocean water to move west. Cold and deep water comes to the surface in the eastern Pacific, a process called upwelling. Lots of fish live in the cold water because it has lots of nutrients.

El Niño and La Niña events can affect weather all over the world. Intense rainstorms and flooding, extreme droughts, the Atlantic hurricane season, and the number of winter storms in many places are affected by these events. These impacts are called teleconnections.

Changes in the atmosphere in one place can affect the weather very far away. Scientists call this phenomenon teleconnections. Sometimes the way air moves around the atmosphere changes over time. The changes...more

Do you like anchovies on your pizza? Many anchovies come from the Southeast Pacific Ocean near Chile and Peru. In fact, there are lots of different types of fish in this part of the world. Why are there...more