In this course, we have explored the current state of the Earths climate, as well as how it is predicted to change in the next 100 years. Weve taken a close look at how different regions will be changed as the climate changes, along with how population and urban growth affect the environment and are, in turn, affected. Most recently, we have focused on specific impactshuman health, Greenland ice, plant phenology, and coral reef ecosystems.

By now, we have become familiar with some of the main points made by the IPCC in their Fourth Assessment Report, specifically: 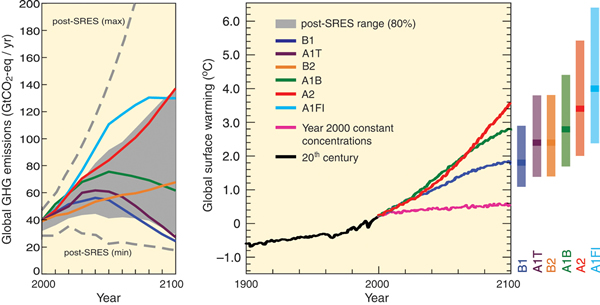 In Week 3, we explored ways in which communities are working together to mitigate the effects of urban heat islands, such as growing green rooftops. This week, we will focus on additional mitigation strategies. Possible human responses to climate change can be characterized in two ways: adaptation and mitigation. Adaptation involves developing ways to protect people and places by reducing their vulnerability to climate impacts. For example, to protect against sea level rise and increased flooding, communities might build seawalls or relocate buildings to higher ground. Mitigation involves attempts to slow the process of global climate change, usually by lowering the level of greenhouse gases in the atmosphere. Planting trees that absorb CO2 from the air and store it is an example of one such strategy.

At the core of most mitigation proposals is the reduction of greenhouse gas emissions through reducing energy use and switching to cleaner energy sources. Frequently discussed energy conservation methods include increasing the fuel efficiency of vehicles, making individual lifestyle changes, and changing business practices. Technologies such as hydrogen fuel cells, solar power, tidal energy, geothermal power, and wind power, along with the use of carbon sinks, carbon credits, and taxation, are aimed at countering greenhouse gas emissions more directly .

There is no shortage of ideas that might help mitigate the impact of climate change! Some are easy and inexpensive, such as replacing incandescent lights with compact fluorescent bulbs which use less electricity than their conventional counterparts. Many mitigation techniques, such as fuel cells and biofuels, are still in the development phase and will require further research to determine their usefulness and commercial viability. Some proposals, such as seeding the oceans with iron to increase phytoplankton populations (and draw more CO2 out of the air), sound more like science fiction and are unlikely to be implemented.

There are so many ideas and proposals that it would be impossible to cover them all in a seven-week course, much less seven days. Instead, we will focus on key mitigation technologies and practices that are currently available, along with some that are likely to be available in the near future.