Literally, phenology refers to the science of appearance. In the simplest terms, phenology is the study that measures the timing of life cycle events in all living things. The life cycle of an organism is the period of time involving a single generation through reproduction. So, when we think of a life cycle in an organism, we are not necessarily referring to the life span, but rather, the period of time it takes to reproduce a generation. Life cycle events are also known as phenophases. In plants, this includes first leaf, budburst, first flower, last flower, first ripe fruit, seed dispersal, and leaf color change, among others. In animals, the phenophases include mating, offspring production, molting, hibernation, and migration, among others.

Scientists who study phenology  phenologists  are interested in the timing of specific biological events with relation to seasonal and climatic change. Seasonal and climatic changes are some of the non living or abiotic components of the environment that impact the living or biotic components. Seasonal changes can include variations in day length, temperature, and rain or snowfall. Phenologists attempt to learn more about the abiotic factors that plants and animals respond to. In other words, how do plants and animals know it is time to migrate, hibernate, set flower, disperse seeds, or enter dormancy? What calendar' or clock' do they use to begin flowering, leafing, or mating?

When teaching lessons on phenology, I sometimes have folks wonder if phenologists are really just studying 'seasonality.' The term seasonality is used to describe changes in the abiotic environment such as the dates of first and last frost whereas the term phenology is used for studying the timing of biological events as influenced by seasonality.

Phenophases occur throughout the life cycle of an organism, however, spring is generally the time that we see a marked increase in the phenological activity that can even appear to be dramatic in contrast to winter. Depending on where you live, think of the changes in your local environment that tell you spring is almost here. In the Washington, DC area, cherry blossoms are a sure sign that spring is on its way. In many parts of the country, hearing the songs of the first robins of the season are what you look forward to. California poppies are an indicator of spring to many along the Pacific shores. In the Midwest, the greening up of fields and pastures is a signal that winter is almost over.

The timing of phenological events such as leaf budburst and first flower can be quite sensitive to environmental conditions. For example, in a particularly warm and dry spring these phenophases might occur weeks earlier than usual, whereas in an exceptionally cool and wet spring they may be delayed by an equal amount of time. As a result, the timing of phenophases tends to vary among years based on patterns of weather, climate, and resource availability. Phenological records based on human observations are a valuable asset in the environmental sciences because they provide something that human-made instruments do not: integrative measures of the physical, chemical, and biological environments. This sensitively to environmental change means that phenological studies are simple and cost-effective way to measure changes in the climate over the long-term.

Phenological observations have been used for centuries to maximize crop production, prepare for seasonal allergies, and anticipate optimal wildflower viewing conditions. Today, this well established science is used to track the effect of global warming and climate change on organisms and to make predictions about the future health of the environment.

Phenology is one of the oldest branches of environmental science dating back thousands of years. Observations of phenological events have provided indications of the progress of the natural calendar since pre-agricultural times.

Many cultures have traditional phenological proverbs and sayings which attempt to forecast future weather and climate: "If oak's before ash, you're in for a splash. If ash before oak, you're in for a soak". But the indications can be pretty unreliable, as an alternative version of the rhyme shows: "If the oak is out before the ash, 'Twill be a summer of wet and splash; If the ash is out before the oak,'Twill be a summer of fire and smoke."

Interest in phenology continues today. In the United States, the National Phenology Network (NPN) engages both professional scientists and citizen scientists in recording phonological events. In Europe, the European Phenology Network has monitoring, research and educational remits. Nature's Calendar in both the Netherlands and the United Kingdom have active Web sites and events. Canada has PlantWatch and many other countries, including China and Australia have phenological programs.

Why is Phenology Important?

From the historical records and observations, we know that phenological events can vary from year to year. Ecosystems can recover from variation between years, but when these changes happen consistently over many years, the timing of events such as flowering, leafing, migration, and insect emergence can impact how plants and animals are able to thrive in their environments.

For many plants, the growing season is triggered by rising air temperatures. Fruit trees flower in response to rising temperatures. Let's take a closer look at cherry trees. They flower in response to warming temperatures, so if it is warmer earlier in the year, the flowers will bloom earlier as well. There is evidence that this is actually happening in some places in the country. For example, Washington DC has traditionally had a Cherry Blossom Festival during the first two weeks in April, culminating in mid April with a parade. Over the past few decades, the cherry trees have been blooming earlier and earlier, so that peak bloom is now at the beginning, rather than during the celebration at the end of the festival.

Cherry trees, as well as many other fruit trees like apples, peaches and pears, are pollinated by insects, which have a seasonal life cycle  they take time to develop from egg to larva to adult. If the trees flower earlier in the season, they may be out of synch with their pollinators. For example if an insect is still in the egg or larval stage, they will not be able to fly from tree to tree and transport pollen from one plant to another. Without pollination, the flowers are not fertilized, and will not produce fruit. 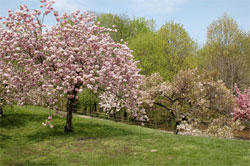 In addition to affecting our food supply, phenological events can also affect human health. Pollen allergies can be exacerbated by some changes in growing conditions. People are allergic to pollen from all kinds of plants, and when the flowering time changes, those reactions will change as well.

Changes in the timing of phenological events have important implications for scientific research. Scientists use phenological data in computer models that project future climate scenarios and the projected impacts of such changes on the environment. Scientists are also interested in how phenology can inform the monitoring of drought conditions and the assessment of risk related to wildfires.

Changes in phenological events can have a significant impact on how we live our lives and interact with our environment on a daily basis. When you start to considerof all the potential impacts due to changes in the timing of leafing, flowering, or migration, it becomes clear that phenology is a very important environmental science.

Phenology Today (from The Phenology Handbook )

Some of the most rigorous phenological studies performed today are carried out by environmental scientists representing a wide range of approaches, including population biologists, community ecologists, climatologists, hydrologists, and specialists in satellite-driven remote-sensing. The integration of scientific disciplines makes for particularly powerful studies because the site intensive nature of one tool (e.g., botanical inventories and detailed phenological studies) can complement the geographically extensive information provided by another (e.g., satellites). Let's consider this in more detail in the following example.

At the continental scale, sensors in NASA's MODIS satellites in space measure the amount of sunlight reflected from the earth's surface. Leaves reflect light that is particularly rich in wavelengths in the near-infrared portion of the light spectrum, which the human eye cannot see but that satellite sensors can measure. The reflectance of light from leaves is greatest in mid-summer when leaves are most abundant, and lowest in winter when grasslands, shrublands, and forest trees are mostly bare. Thus, satellites detect the onset of spring by detecting a rapid increase in the reflectance of infrared wavelengths  this phenomenon is called green-up. Alternatively, the senescence of leaves in the autumn leads to a decrease in reflectance, and this is called brown-down. By collecting these remotely-sensed data on a regular basis and on a large geographic scale, scientists can accu­rately measure the onset of spring growth across the entire Northern or Southern Hemisphere.

At the same time as green-up is detected around the world by satellites, plant-watchers on Earth can observe the fine details of this process. Families, students, nature enthusiasts, and professional botanists who regularly visit a natural landscape can track green-up on a daily or weekly basis. By identifying which habitats and plant species are leafing out, we can identify the phenological events and species that contribute most to the infrared reflectance values observed from space (this process is called "ground-truthing").

At an even finer spatial scale (e.g., from square miles to square meters), biogeochemical sensors can measure daily and seasonal fluctuations in temperature, precipitation, atmospheric gasses, sunlight, soil nutrients, stream flow, and other components of the abiotic environment upon which plants and animals require for growth. With these data on hand, scientists can determine the influence of environmental factors on phe­nological patterns.

The Phenology Handbook: a guide to phenological monitoring or students, families, teachers, and nature enthusiasts.