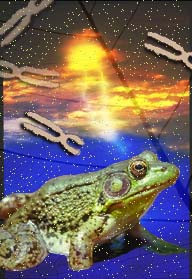 In the beginning, Earth had a hydrogen based atmosphere. Since molecules like methane and ammonia were included it must have been a pretty smelly place! In time, the early atmosphere of Earth changed from a hydrogen dominated one to one which contained lots of oxygen. Examples of those molecules include carbon dioxide, and water vapor. In its primordial state Earth's atmosphere resembled other primitive atmospheres.

Certain chemical reactions require energy to make them go. That energy can come from ultraviolet (UV) light or lightning which can link small molecules together to make larger ones. The Miller-Urey experiment showed that ultraviolet light plus lightning in a hydrogen-based atmosphere can produce interesting long chemicals which form the foundation of living cells.

Earth's early environment was conducive to this process because the early atmosphere did not provide protection from ultraviolet light. On Earth today, the ozone layer absorbs almost all but the longest wavelengths of UV. On the early Earth, there was little free oxygen, so UV from the sun fell directly onto the surface of the Earth.