Check out some common silicate minerals!

Did Life First Form in a Mica Sandwich at the Bottom of an Ancient Sea?

Minerals occur naturally on rocky planets and form the building blocks of rocks. They are non-living, solid, and, like all matter, are made of atoms of elements. There are many different types of minerals and each type is made of particular types of atoms. The atoms are bonded together and arranged in a special way called a crystal lattice, a network of atoms. The lattice of atoms is what gives a mineral its crystal shape.

There are two main ways that new crystals of minerals grow. Either they form when molten rock, called magma below a planets surface and lava above, cools and changes state from a liquid to a solid allowing atoms to bond together into mineral crystals. Or, some minerals grow when water, that is rich with dissolved elements, evaporates and the atoms in the water get very close together, eventually bonding together forming solid minerals.

The special shapes of minerals are not the only difference between them. Minerals can be identified by other physical properties as well. Each type of mineral has its own unique set of characteristics. 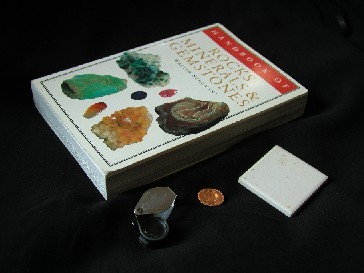