These pebbles were deposited in a stream that once flowed over this area in Indiana, USA thousands of years ago.
Click on image for full size
Courtesy of Bruce Molnia, Terra Photographics

When water or wind loses energy and slows down, sediment can no longer be carried in it. The particles fall through the water or air and form a blanket of sediment on the bottom of a river, a lake, ocean, or on the surface of the land.

Settling out of the wind or water depends on the size of the sediment. Larger pieces will settle more quickly than smaller ones. The opposite is true as well, so it takes more energy to move larger sediment through the water or air than small sediment.

The process of settling down is called deposition. How does deposition happen?
Try this experiment and find out! 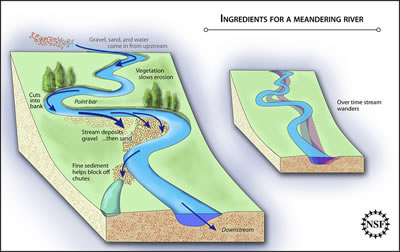