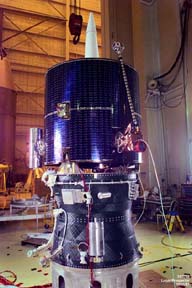 Scientists have used the Lunar Prospector spacecraft to find out that the Moon has a small core. This supports the formation theory that the Moon was once part of Earth created by a large impact. Lunar Prospector used gravity measurements to find out how big the Moon's core is. The Moon's core only is more than eight times smaller than the Earth's core.