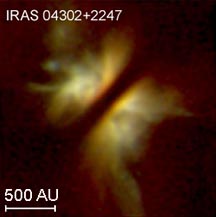 Scientists using the Hubble Space Telescope's Near-Infrared Camera and Multi-Object Spectrometer (NICMOS) have taken images of possible planet-forming regions. The images show disks of dust circling different stars in the constellation Taurus. "While the existence of these disks has been known from prior infrared and radio observations, the Hubble images reveal important new details such as a disk's size, shape, thickness, and orientation," said Deborah Padgett of Caltech's Infrared Processing and Analysis Center. The dust-cloud disks can only be seen edge-on because the stars' light overpowers the reflected light from the disks. Scientists are interested in looking at planet-forming regions because they hope to understand how our Solar System formed.