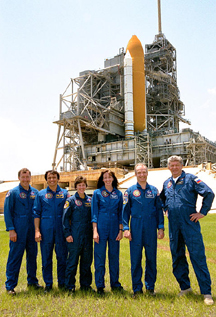 The shuttle Discovery is scheduled to launch on June 2, 1998. This launch will feature a new ET. Not a new extra-terrestrial, but a new external tank!

This new ET looks like the old external tanks, but it weighs 7,500 pounds less. This loss of weight means that the shuttle can carry that much more cargo. This will be especially important when the shuttle begins transport of the new International Space Station. Discovery's tank is the first off of the assembly line. It has undergone strenuous testing in preparation for the June launch.

During its nine-day mission, Discovery will dock with space station Mir. Here, Andy Thomas will come onboard the shuttle for his ride home to Earth. Thomas has been a NASA resident on Mir since January. He is the last American to stay aboard the Russian space station.