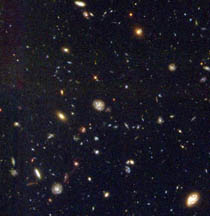 Scientists now have a new observation to compliment the Hubble Deep Field. It's called the Hubble Deep Field-South because it was taken while looking at a part of the southern hemisphere sky. The HDF-S is a 10-day-long exposure from October 1998. The Hubble Space Telescope looked at a part of the constellation Tucana to make the HDF-S. The original HDF was made from a part of space near the Big Dipper. Scientists also wanted the HDF-S to look at a distant quasar so they could get more information from the HDF-S. The HDF and HDF-S are like core samples of the sky. We can't take pictures of the entire sky as far into space as the deep fields because it would take too long. In fact, it would take 900,000 years to map the entire sky!