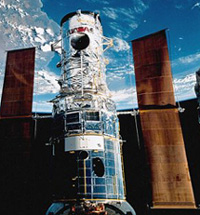 Well not exactly just because. NASA has chosen to include the COS instrument on the Hubble Space Telescope because it will help astronomers study how stars were formed billions of years ago. It will also help astronomers find out how the first elements were formed. COS stands for Cosmic Origins Spectrograph.

The instrument will be put onboard the Hubble telescope in 2002. The COS is expected to be a very important HST instrument into the first decade of the next century. The estimated cost of this state-of-the-art spectrograph is $25 million.

The Hubble Space Telescope is a 2.4 meter reflecting telescope. It continues to make astronomical observations while in low-Earth orbit.