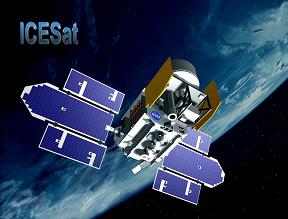 ICESat will use a laser to measure the height of the ice sheets that cover Greenland and Antarctica. These measurements will help scientists learn whether the ice sheets are shrinking, growing, or staying the same size. Knowing about changes in the ice sheets can help us understand changes in Earth's climate, including possible changes in sea level caused by global warming.

ICESat was launched from California aboard a Boeing Delta II rocket. The satellite will orbit Earth about 600 kilometers (373 miles) up in a polar orbit that will carry it over both the North and South Poles.

The Delta II rocket also carried a second, smaller satellite called CHIPS which will study dust and gas in space. CHIPS is about the size of a large suitcase.

The Latest on Global Warming

Recently, scientists at the U.S. National Center for Atmospheric Research have shown that there is a 90% chance that global temperatures will rise 3-9 degrees Fahrenheit over the next 100 years. This is...more