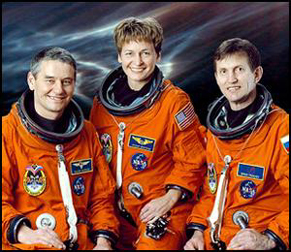 The Expedition Four Crew is going back home to Earth after spending over six months on the International Space Station (ISS). A new team of three, called the Expedition Five Crew, will take over the running of the space station. They arrived at the station a few days ago on the space shuttle Endeavour.

The new Expedition Five Crew will have a busy four-month stay at the ISS. During their stay, the station will be visited by four spacecrafts and the crew plans to do two space walks. Also, they will collect data for 24 different scientific experiments.

The space shuttle Endeavour launched on June 5, 2002. It carried the new crew and almost 3 tons of experiments and supplies, such as food, to the ISS.

Endeavour also carried new parts for the station's robotic arm and two Mission Specialists who can fix and improve the arm. The robotic arm helps build and maintain the station. The arm works the same way that your arm and hand works when you are building things. Hopefully, when the Mission Specialists are through with their three space walks, the arm will be able to move to all parts of the station on a track that works like a railroad track. Being able to move along the track will allow the arm to reach easily all parts of the station.