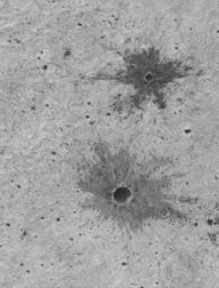 The Leonids have come and gone, but scientists are still studying this exciting meteor shower. One astronomer believes that he videotaped a meteorite impacting the Moon!

Viewers in Europe and and parts of the Middle East saw the best show on November 18, 1999. Scientists estimate an average of 70 meteors an hour. Those living in North America had a small but respectable average of 20 to 40 an hour. All those that woke up before dawn received a special treat.

"It works like flypaper," explains NASA astrophysicist Dr. John Horack. "When tiny particles in the atmosphere strike the exposed acrylics, they stick."