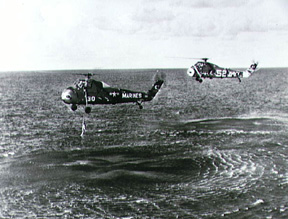 The Liberty Bell 7 was flown by Gus Grissom in 1961. When the capsule landed in the ocean, the hatch blew open too soon, allowing water to flow in. Grissom survived the accident, but the helicopter couldn't support the weight of the capsule.

The spacecraft was still in good shape after many years in the sea. Even the cord used by the helicopter while trying to save the vessel was still attached. The capsule weighed almost 2 tons because it was full of so much mud. This made it difficult to bring up from 3 miles below the surface.

The capsule will first go on a 3 year tour of the country and then it will stay in the Kansas Cosmosphere and Space Center in Hutchinson, Kansas.