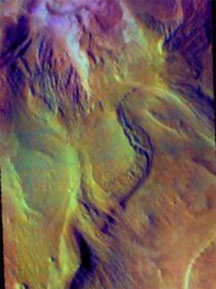 NASAs Mars Odyssey took this picture over the part of Valles Marineris. It is a false-color infrared picture and each color represents a different type of rock, sediment, or dust.
Click on image for full size
Courtesy of NASA

Researchers examining data from the Odyssey spacecraft have interesting news about water and rocks of the red planet, Mars.

In mid-October the researchers had a chance to look for ice in the soil at the Martian north pole when the frozen carbon dioxide, which caps the pole during colder months, evaporated. In the soil, the scientists found enormous amounts of frozen water. They believe that there is probably even more ice at the north pole than at the south pole of the planet.

Other researchers have been looking at infrared and visible images of surface of Mars taken by the Odyssey spacecraft. The pictures show that the surface of Mars is covered with complex rock layers, impact craters and patterns of wind erosion and deposition. Dr. Philip Christiansen, who works with the pictures, said that, color infrared images of Mars show variations in rock layers similar to those seen in the layered rocks of the Grand Canyon.