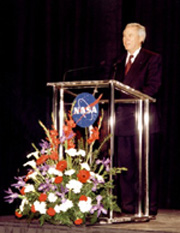 The United States House of Representatives recently put a damper on NASA's celebration of the launch of the Chandra Observatory. The space program will take an 11% cut in its budget, which amounts to $1.3 billion in the next year. Here are some highlights of the statement made by NASA Administrator Dan Goldin.

"This cut destroys the technology base built by NASA," Goldin said. "Our ability to further reduce costs and increase scientific productivity would end. NASA is one of only a few investments our nation makes to ensure a bright future, a strong economy and the technology base to achieve it. Perhaps most sadly, we will lose the opportunity to inspire a future generation of children. I won't feel better until every nickel is restored."