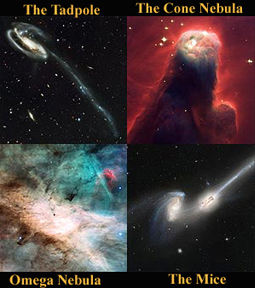 A composite image of the first four images taken by Hubble Space Telescope's new Advanced Camera for Surveys (ACS).
Click on image for full size
Windows Original (Based on Image courtesy of NASA and the ACS Science Team

The pictures released by Hubble Space Telescope's new Advanced Camera for Surveys (ACS) are nothing but FAR OUT! This new camera was put on Hubble during a servicing mission in March 2002. As can be seen by these great images, the camera is working perfectly!

Four ACS images of the universe were released yesterday. The first is a colliding galaxy fondly named the Tadpole. Tadpole is 420 million light-years away. The "tail" that you see is actually a line of stars!

Another image shows the collision of two spiral galaxies. These two galaxies are known as the Mice. A third image shows the cold dust and gas of the Cone Nebula. Finally, you can see the Omega Nebula, where a lot of new stars and planets are being formed.

The servicing mission to the Hubble Space Telescope in early March was a great success. The Telescope has been declared healthy and fit...and is better than ever! Though instruments will be tested for...more