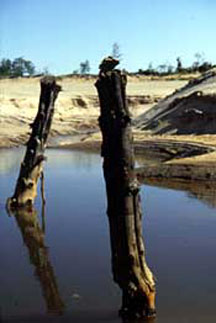 How old are the trees in your backyard? They're probably not even close to the age of an ancient forest found buried in Michigan. Scientists from Michigan Technological University discovered spruce trees estimated to be over 10,000 years old.

The trees were buried under water and sand for all these years. The scientists had to hold back the water and excavate the sand in order to study the trees. They quickly cut off 140 cross-sections of trees to study before the water caved in and the forest was destroyed.

When the sections of wood were analyzed, scientists made an interesting discovery. There are tree rings inside the cross-sections, which are used by scientists as a way to study the history of the tree. There should have been a change in the rings because of the sudden change in climate--but there wasn't. Basically, this means nature may not always warn us that the climate is changing.