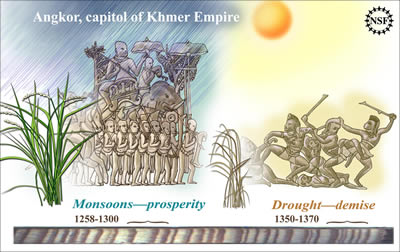 Studying tree rings has revealed a record of wet and dry times that helps make sense of the mysterious and gradual demise of Angkor, the capitol of the Khmer Empire in Cambodia from the 9th to 14th centuries. A very wet period with rich monsoons and plentiful crops from 1258 to 1300 was followed by many years of drought from 1350 to 1370.
Click on image for full size
Image Courtesy of Zina Deretsky, National Science Foundation

The Earth keeps a record of past climate in several different ways, including tree rings, which show what climate was like for each year of a tree's life. A team of researchers has used tree ring data to learn more about the fall of Angkor, the capitol of the Khmer Empire in Cambodia.

Brendan Buckley, a researcher from the Lamont-Doherty Earth Observatory at Columbia University, and his colleagues have put together a record of periods of drought and moisture in Southeast Asia from 1250 to 2008 AD. Large sets of information like this tree ring data show us patterns and events that happen over longer time periods than a human lifetime.

By looking at tree ring data, and analyzing rain, drought, and temperature data, we can see the link between climate in the environment with what was happening with humans at that time. Angkor was a city that relied heavily on water. Buckley and his colleagues learned that in the mid- to late 1300's, Angkor experienced very dry conditions for many decades, followed by several years of severe wetness that may have caused damage to the city. Afterwards, a shorter but more severe drought in the early 1400's may have been more than this city could handle.

These types of findings can make us realize how important it is to learn what the natural world can tell us. The cypress trees that can tell a story of the past with their tree rings are becoming rare because this wood is being harvested for an illegal timber trade.