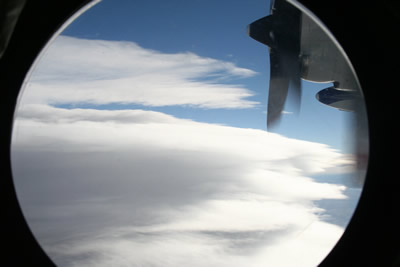 A team of atmospheric chemists has moved closer to what's considered the "holy grail" of climate change science: the first-ever direct detections of biological particles within ice clouds.

The team, led by Kimberly Prather and Kerri Pratt of the University of California at San Diego, Scripps Institution of Oceanography, sampled water droplet and ice crystal residues at high speeds while flying through clouds in the skies over Wyoming.

Analysis of the ice crystals revealed that the particles that started their growth were made up almost entirely of either dust or biological material such as bacteria, fungal spores and plant material.

While it has long been known that microorganisms become airborne and travel great distances, this study is the first to yield direct data on how they work to influence cloud formation.

Results of the Ice in Clouds Experiment - Layer Clouds (ICE-L), funded by the National Science Foundation (NSF), appear May 17 in the advance online edition of the journal Nature Geoscience.

"If we understand the sources of the particles that nucleate clouds, and their relative abundance, we can determine their impact on climate," said Pratt, lead author of the paper.

The effects of tiny airborne particles called aerosols on cloud formation have been some of the most difficult aspects of weather and climate for scientists to understand.

In climate change science, which derives many of its projections from computer simulations of climate phenomena, the interactions between aerosols and clouds represent what scientists consider the greatest uncertainty in modeling predictions for the future.

"By sampling clouds in real time from an aircraft, these investigators were able to get information about ice particles in clouds at an unprecedented level of detail," said Anne-Marie Schmoltner of NSF's Division of Atmospheric Sciences, which funded the research.

"By determining the chemical composition of the very cores of individual ice particles, they discovered that both mineral dust and, surprisingly, biological particles play a major role in the formation of clouds."

Aerosols, ranging from dust, soot, and sea salt to organic materials, some of which travel thousands of miles, form the skeletons of clouds.

Around these nuclei, water and ice in the atmosphere condense and grow, leading to precipitation. Scientists are trying to understand how the nuclei form, as clouds play a critical role by both cooling the atmosphere and affecting regional precipitation processes.

The ICE-L team mounted a mass spectrometer onto a C-130 aircraft operated by the National Center for Atmospheric Research (NCAR) in Boulder, Colo., and made a series of flights through a type of cloud known as a wave cloud.

The researchers performed in-situ measurements of cloud ice crystal residues and found that half were mineral dust and about a third were made up of inorganic ions mixed with nitrogen, phosphorus and carbon--the signature elements of biological matter.

The second-by-second speed of the analysis allowed the researchers to make distinctions between water droplets and ice particles. Ice nuclei are rarer than droplet nuclei.

The team demonstrated that both dust and biological material indeed form the nuclei of these ice particles, something that previously could only be simulated in laboratory experiments.

"This has really been kind of a holy grail measurement for us," said Prather.

"Understanding which particles form ice nuclei, and which have extremely low concentrations and are inherently difficult to measure, means you can begin to understand processes that result in precipitation.  Any new piece of information you can get is critical."

The findings suggest that the biological particles that get swept up in dust storms help to induce the formation of cloud ice, and that their region of origin makes a difference. Evidence is increasingly suggesting that dust transported from Asia could be influencing precipitation in North America, for example.

Researchers hope to use the ICE-L data to design future studies timed to events when such particles may play a bigger role in triggering rain or snowfall.

The research was also supported by NCAR.

Paper co-authors include Paul DeMott and Anthony Prenni from Colorado State University, Jeffrey French and Zhien Wang of the University of Wyoming, Douglas Westphal of the Naval Research Laboratory in Monterey, Calif., Andrew Heymsfield of the National Center for Atmospheric Research, and Cynthia Twohy of Oregon State University.