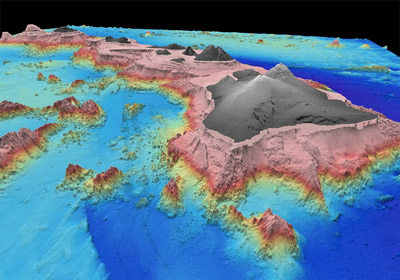 The topography of the Hawaiian Islands is shown in 3-D.
Click on image for full size
Image Courtesy of Paul Johnson, University of Hawaii

Scientists are still trying to learn how the volcanic Hawaiian Islands formed. One theory is that they are made by upwelling plumes of lava from the mantle inside the Earth.

The scientists used a large network of sea-floor seismometers to test this theory. The seismometers were used to record the timing of seismic shear waves from large earthquakes (magnitudes greater than 5.5) around the world. This information was used to determine whether seismic waves travel more slowly through hot rock as they pass beneath Hawaii.

Based on the data they gathered, the scientists were able to construct a 3-dimensional image of the Hawaiian mantle. There is a strong case for the existence of a deep mantle plume and this can tell us more about not only Hawaii, but also more about what the inner-core of the Earth is made up of.