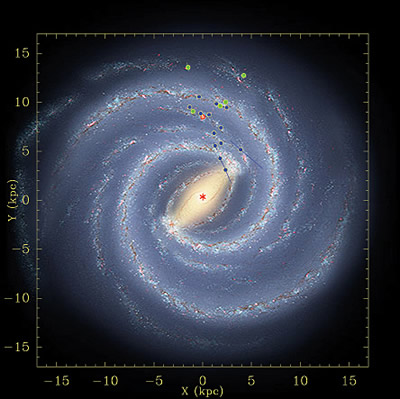 Locations of star-forming regions (dots) superposed on an artist's conception of the Milky Way. The locations have been measured by "triangulation" using the NRAO/NSF Very Long Baseline Array of radio telescopes.
Image Courtesy of Mark Reid, Harvard-Smithsonian Center for Astrophysics; Robert Hurt (NASA/IPAC)

Based on a new study, astronomers think that the Milky Way, our home galaxy, is rotating about 15 percent faster than they previously thought. Based on this new calculation, the mass of the Milky Way is 50 percent greater than they thought, which means that we may run into the Andromeda galaxy in about 5 billion years, which is sooner than expected.

The Milky Way is a spiral galaxy, with the youngest and most massive stars collected in arms that curl around the galactic center. Astronomers have not been able to agree on just how many spiral arms the Milky Way possesses: either two, curving off in opposite directions from the center and wrapping around fairly tightly, or four, wrapping around more loosely. The confusion is because because it's been hard to figure out the exact distances to nearby stars and the position and geometry of the spiral arms where these stars reside.

In order to learn more about this, an astronomer names Mark Reid led a team that measured the distances to 10 bright galactic landmarks using 10 radio telescopes in Hawaii, across the United States, and the U.S. Virgin Islands. The team figured out the distances to these bright radio sources by making observations six months apart when the the Earth is on opposite sides of its orbit around the sun. Based on their measurements, they decided that there are probably four spiral arms in the Milky Way galaxy, although it is still possible that the galaxy has only two spiral arms or that there are two dominant arms that contain both old and young stars, along with two less prominent arms that have only younger stars.

Reid and his team also determined that the sun is closer to the center of the Milky Way than previously thought. Our galaxy is moving toward its twin, the Andromeda galaxy, at about 100 km/second, although it's not known whether the two galaxies are on a direct collision course or will pass by each other.