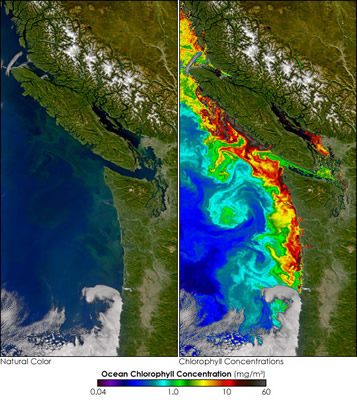 Scientists are discovering why blooms of harmful algae are often seen along the U.S. Northwest Coast. This image was taken on September 29, 2004 and shows a large bloom of Pseudo-nitzschia, a toxic algae, off the Strait of Juan de Fuca.
Click on image for full size
Image Courtesy of the SeaWiFS Project, NASA/Goddard Space Flight Center, and ORBIMAGE.

Marine scientists have found that under certain conditions, toxic algae can break away from offshore locations in the ocean. After breaking off, it can be transported closer to shore where it may trigger harmful blooms of algae. Toxic algae produces a deadly biotoxin that can accumulate in shellfish, crabs and some fish. The biotoxin attacks the nervous system it can be harmful to humans or can cause death in birds, marine mammals and humans who consume affected marine species. Toxic algae can also hurt the economy in coastal communities that contain commercial fisheries, recreation, and tourism.

This is happening in the Straight of Juan de Fuca, a part of the ocean that separates Washington State from British Columbia, Canada. When there's a toxic algae bloom, the toxins accumulate in shellfish and beaches have to be closed where people go for fishing and recreation.

"Understanding how and where harmful algal blooms originate will help provide early warnings to protect human health and reduce the impact of biotoxins on coastal shellfisheries," said Vera Trainer, a scientist at the NOAA Fisheries Northwest Fisheries Science Center in Seattle.

Scientists noted that the Juan de Fuca eddy, a circular water mass rotating some 30 miles off the northern coast of Washington at the mouth of the Juan de Fuca Strait, frequently contained significant populations of the microscopic toxic alga, Pseudo-nitzschia.

During the five-year study, the researchers took thousands of measurements in the ocean and conducted experiments onboard research vessels and in their laboratories. They hoped to better understand the growth of this toxic algae.