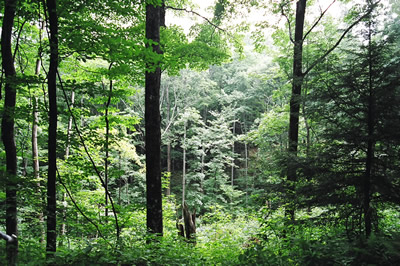 The environment--and the individual trees within it--look alike but vary in thousands of ways.
Click on image for full size
Image Courtesy of James Clark

When studying ecosystems, scientists usually look at general information about different plant species. Doing this can be useful because it makes it possible to look at more species at a time, but it also means they can't learn the little ways in which plant species are different from each other.

James Clark, a forest ecologist from Duke University, looked at data for 33 species of trees. The study included 22,000 individual trees from 11 different forests in the southeastern United States. He used observations of things like tree diameter, the width and height of the tree canopy, the amount of sunlight in an area, and the type of soil for all of the trees in the 11 stands of forest.

Clark learned that individual trees in a species often respond the same to environmental changes as trees from the same species, rather than trees from different species. He said this is important because as the individuals in a population react to the environment, the similarity they share with others of their own species makes them compete within their species. This competition makes it so trees of lots of different species can live in the same environment.

These findings have brought up a new perspective: instead of thinking that introducing new species into an environment makes it harder for the existing species to survive, diversity makes it easier for all species to be successful.