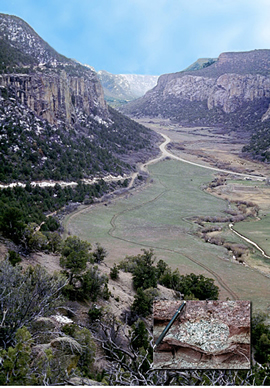 Unaweep Canyon in the Rocky Mountains is the site of a deep gorge that reveals ancient landscapes and sediments. The inset image is of a "dropstone" from an ancient glacier.
Click on image for full size
Image Courtesy of Gerilyn Soreghan

For a long time scientists have thought that, like today, the tropics stayed warm throughout Earth's last major glaciation 300 million years ago. New evidence shows that this isn't the case. In fact, the tropics experienced cold temperatures at that time.

Geologist Gerilyn Soreghan of Oklahoma University found evidence for this in an ancient glacial landscape in the Rocky Mountains of western Colorado. Three hundred million years ago, the region was part of the tropics. The continents were then assembled into the supercontinent Pangaea.