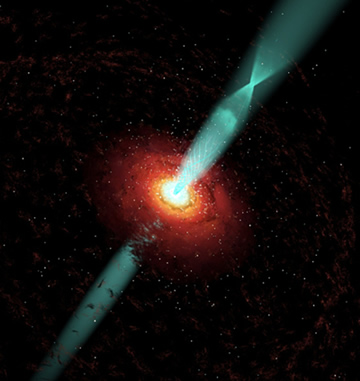 Using the National Science Foundation's (NSF) Very Long Baseline Array (VLBA) and a host of international telescope partners, a team of researchers has made the clearest observation yet of innermost region of a black hole.

From the observations, astronomers found strong evidence that the enormous jets of particles emitted by supermassive black holes are corkscrewed in a way predicted by theory. The researchers believe the coiling is a result of twisted magnetic fields acting on the particle streams.

The researchers reported their findings in the April 24 issue of Nature.

Led by Alan Marscher of Boston University, the international team of researchers studied the galaxy BL Lacertae located 950 million light years from Earth. By observing an outburst from the galaxy from late 2005 to 2006, the team observed bursts of photons oriented in a way predicted by theories about the twisted magnetic fields of black holes.

The VLBA is part of NSF's National Radio Astronomy Observatory (NRAO). A more detailed release--including graphics and a broadcast-quality animation--is available from NRAO at: http://www.nrao.edu/pr/2008/bllac

Additional images, explanations, data sets and even a related song are available at a Web site posted by Marscher: http://www.bu.edu/blazars/BLLac.html