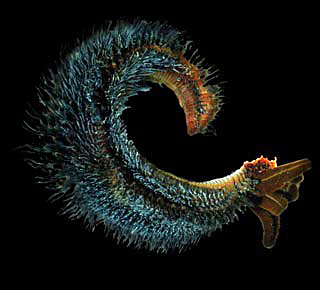 Scientists are taking a close look at a tiny microbe to learn more about how life adapts in extreme environments.

The microbe, a species of bacteria, lives in the deep-sea at hydrothermal vents. Scientists have found it living on the backs of Pompeii worms. They have also found it growing on the surfaces of the chimneys where hot liquids spew from below the sea floor.

Scientists are studying the microbes genes to better understand how it has adapted to live in this extreme environment. One gene, in particular, allows the microbe to make a special protein when its near the hot liquids released from the sea floor. The scientists wanted to understand how the gene helps the microbe.

The gene was thought to only be found in microbes that live in very hot places, warmer than 80 degrees Celsius. But this microbe lives in environments with much cooler temperatures. In the deep ocean near hydrothermal vents, the seawater is very cold yet there is also very hot liquid spewing from below the seafloor. Microbes that thrive in this environment must adapt to both the cold and the hot temperatures. So, it might allow this microbe to survive the quick changes in temperature in this environment.

Eubacteria, also know as true bacteria, are microscopic prokaryotic cells. Cyanobacteria, also called blue-green algae, are Eubacteria that have been living on our planet for over 3 billion years. Blue-green...more