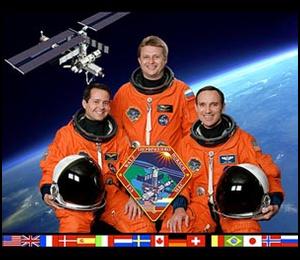 Ham Radio on the ISS

Of the People and For the People!
News story originally written on January 17, 2002

During a space walk on January 14, 2002, the Expedition Four crew of the International Space Station (ISS) installed an amateur radio antenna outside the ISS. Another space walk is scheduled for January 25, 2002. During this space walk, three more antennas will be installed outside the ISS. The installation of these antennas will allow the amateur radio equipment (ham radio) to be moved on the inside of the ISS. When the ham equipment is moved to the living quarters in the ISS, it will allow for increased contact between the ISS crew and their families, as well as increased contact between the crew and hundreds of schoolchildren around the world.

Another way that the crew onboard the ISS seem to be of the people and for the people is by answering questions from the general public. There is an Ask-ISS crew page set up for this.

The shuttle mission that brought this Expedition Four crew to the ISS carried almost 6,000 American flags into space and back. NASA wanted to honor the families who lost loved ones in the tragic events of September 11. The flags that were carried into space were then given to the families. Former Administrator Goldin said, "America's space program has a long history of carrying items into space to commemorate historic events, acts of courage and dramatic achievements. 'Flags for Heroes and Families' is a natural extension of this ongoing outreach project. We feel 'Flags for Heroes and Families' is a fitting tribute from our Nation's space program to honor those affected by this American tragedy. The entire NASA family has come together with a historic display of unity on a project designed to comfort of all who have been touched by these horrific events."