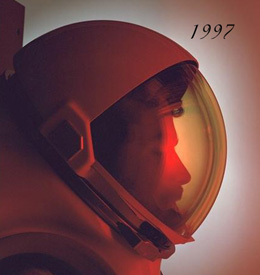 Space activity in the last year was spectacular! 1997 in space - people are saying this year is second only to 1969 when the U.S. first landed a man on the Moon.

To start off with, there were eight successful shuttle missions launched and landed by NASA. These missions included microgravity research aboard the shuttle and fixing the Hubble Space Telescope. The new and improved Hubble telescope sure had a fantastic year! The astronomers kept the telescope busy with anything from photographing Mars to researching globular clusters. The ESA/NASA SOHO satellite also had a busy year. It tracked some BIG solar storms.

The most well-followed and successful mission of the year was the Mars Pathfinder mission. The world watched with curiousity as the rover investigated the Martian surface. You know you're a real space-nut this year if you became the proud owner of a Mattel Hot Wheels JPL Sojourner Rover action pack! The Cassini satellite was also launched. It is on its way to Saturn, a 2.2 billion-mile journey!

This year also provided enough material for the makings of a movie (remember, you heard it here first!). The Mir space station seemed to have its share of trouble. The most dramatic event was the day a cargo ship crashed into the ailing Mir station causing the loss of power and the life support systems. Then again, maybe all of those problems on Mir were somehow El Nino's fault or maybe it was those pesky snowballs entering the Earth's atmosphere?

The orbiter Columbia was launched July 1, 1997. This begins a 16-day mission. The purpose of this mission is to study the influences of a micro-gravity environment. This mission includes the MSL-1 or Microgravity...more

The two cosmonauts on space station Mir were scheduled to perform a spacewalk on July 18th to fix the damages caused by the June 25th crash. More troubles have struck the station though! Russian flight...more

El Nino is a disruption in the ocean-atmosphere system in the tropical Pacific. It has global consequences. When there are El Nino conditions in the Pacific, one can expect weather changes all over the...more