A short circuit in an oxygen-generating device on the Mir space station caused a small fire on the night of February 24. The fire caused some damage to hardware on the station and the crew was exposed to heavy smoke for about five minutes. No one was injured.

During the fire, the crew of Mir wore masks to protect themselves from breathing in smoke. After the fire was extinguished, the on-board physician (U.S. astronaut Jerry Linenger) made sure the crew was still in good health. The crew continues to wear masks and goggles until the atmosphere of the Mir station has been proven safe to breathe.

The fire occurred in Kvant module 1 at 10:35pm, Moscow time. It burned for about 90 seconds. It was extinguished by crewmembers using foam from three fire extinguishers. The fire is believed to have occurred due to a crack in an oxygen generator's shell, causing its contents to leak into hardware and circuitry.

The oxygen generator is made of lithium perchlorate candles which usually burn for about 10-15 minutes. They are used to generate extra oxygen when more than three people are on board the space station.

Damage to some of Mir's hardware occured due to the excessive heat. The generator and its surrounding hardware was destroyed as well as a few outer insulation layers on various cables. Yet, all of the space station's systems are still operating normally, according to Russian reports.

"It is unfortunate that this incident occurred, but we are thankful that there were no injuries," said Frank Culbertson, Director of the Phase One Shuttle-Mir program. "Russian management and operations specialists have been very informative as to what happened, and we are working closely with them on evaluating the health of the crew and how best to respond to the damage," added Culbertson. "The crew did a great job handling the fire, and the ground support has been excellent on both sides." 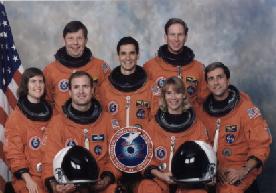